THE CREATOR AND THE CREATIONS (2)

The Creator and the creations, Part II

It is alike that of the water; once it manifested into ice, it is hidden by its manifestation.

Be that as it may, The Little Essence is the obligatory existence for all other existence as water is the obligatory existence for ice. As such, The Little Essence is “The Hidden” in every creation (including space and time). In this way, He is therefore All-Encompassing, All-Seeing, All-Hearing, All-Knowing, He is with us all the time and wheresoever we turn, we are mentally seeing “The Hidden” lurking behind the creations. Alike that of the ice, when we see it mentally we know there is water behinds the tough looking ice. Such being the case, not even a leave dropped in the remotest part of the Amazon without His Knowledge. This extends too, to our thinking and feeling. Allah had commanded in the Quran to the effect:

With Him are the keys of the Unseen, the treasures that none knoweth but He. He knoweth whatever there is on the earth and in the sea. Not a leaf doth fall but with His knowledge: there is not a grain in the darkness (or depths) of the earth, nor anything fresh or dry (green or withered), but is (inscribed) in a Record clear (Loh Mahfuz). 26

Since the source of all creations is The Little Essence as such, The Greatness, Vastness and Loftiness of The Whole Essence are beyond human comprehension. Allah had commanded in the Quran to the effect:

And if all the trees on earth were pens and the Ocean (were ink), with seven Oceans behind it to add to its (supply), yet would not the Words of Allah be exhausted (in the writing).27

The Little Essence in each and every creation (including space and time) dutifully carries out whatsoever He had decreed in His Divine Plan (Loh Mahfuz). Consequently, whatsoever happenings to us or those around us or elsewhere are, in reality, orchestrated by the partnership of The Little Essence and The Divine Plan. Allah had commanded in the Quran to the effect:

Seest thou not that Allah merges Night into Day and He merges Day into Night; that He has subjected the sun and the moon (to His law), each running its course for a term appointed.28

Allah had created His creation in stages. For the seven heavens, the earth and those in between, He created them in six phases. Allah had commanded in the Quran to the effect:

He who created the heavens and the earth and all that is between, in six phases29

See ye not how Allah has created the seven heavens one above another.30

However before He created heavens, earth and in between them in six phases, He had already created His Throne, the Veils of Light, Ring of Water (vapours), the “Pens”, the Sidratul Muntaha (a place above the seventh heaven) and others. In this way, these creations existed before the creation of heavens, earth and in between them. Hence in the Quran there are many provisions of His commandment, “Be”.31

That there are the Veils of Light in existence before the creations in the six phases are created, is fortified by Prophet Muhammad (pbuh) saying that God is veiled by Veils of Light and to God’s commandment that He spoke behind Veils. Hence when He commanded,” Be”, this was done behind Veils. Allah had commanded to the effect:

It is not fitting for a man that Allah should speak to him except by inspiration, or from behind a veil, or by the sending of a Messenger to reveal.32

Prophet Muhammad (pbuh) had said to the effect:

Veiling Him are the Veils of Light and if these Veils are lifted whosoever see Him will be destroyed.33

Many are confused as to how the 70 Veils of Light can veil Allah, The Exalted. Hopefully, the diagram below can assist. The veiling is actually all around the creations (not The Essence) to protect them from the destructive power of The Essence. 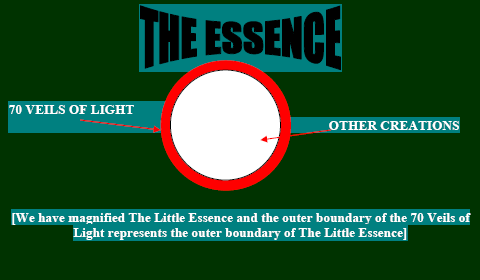 The fact that His Throne existed before the creations in the six phases were created can be noted from His following commandment to the effect:

It is Allah Who has created the heavens and the earth, and all between them, in six Days, and is firmly established on the Throne.34

His Throne doth extend over the heavens and the earth35

Many cannot accept that The Throne can accommodate Allah, The Great. Hopefully the diagram below can enlighten them. The Essence at the edge of the 70 Veils of Light is as if sitting on the Throne. The Veils are but the cushion on The Throne. 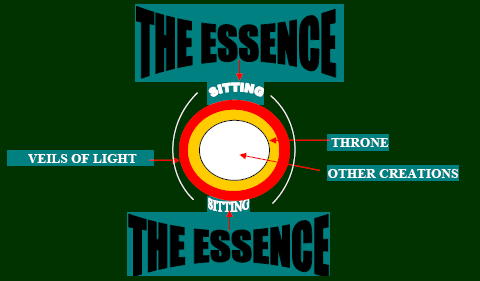 His Throne was then on (Ring of) water. Allah had commanded to the effect:

He it is who created the heavens and the earth in six phases – and His Throne was over the Waters.36

According to Prophet Muhammad (pbuh) to the effect:

Above the seventh heaven there is the “sea” which dimension is alike the distance between sky and earth.37

Many are unable to envisage what Allah meant by His commandment that His Throne is above the water. Hopefully the diagram below can enlighten them. 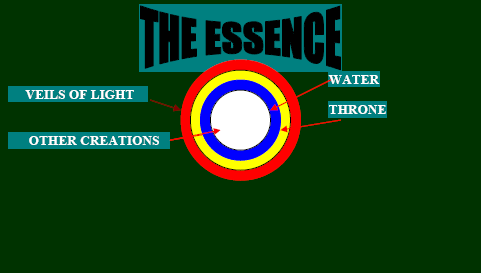 For indeed he (Muhammad) saw him (Gabriel) at Sidratul Muntaha.39 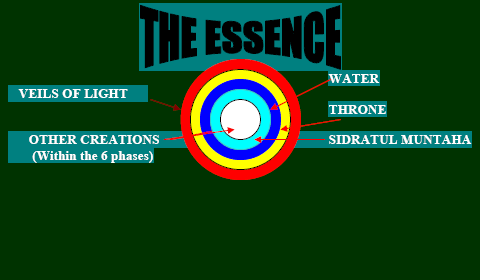 Prophet Muhammad (pbuh) had said to the effect:

Then Gabriel ascended with me to a place where I heard the creaking of the Pens.42

Then Gabriel ascended with me until I saw Al Mustawa. There I heard the creaking of Pens.43

As for the soul of Prophet Muhammad (pbuh), it was created before the creations in the six phases. Jesus had said that after it was created, it was placed in celestial splendour (we opined that it was The Sidratul Muntaha44) and Allah said to it that for Prophet Muhammad (pbuh) He created all creations and he shall be the blessing of The Lord for all creations.45 Allah had commanded to the effect:

We sent thee not, but as a mercy for all creatures.46

All creations are within the Divine Plan or Loh Mahfuz including the voice of Allah speaking to Prophet Muhammad (pbuh) during his ascension to heaven and also to Prophet Moses at the Mountain. To Moses Allah had commanded to the effect, “By no means canst thou see Me (direct).”47 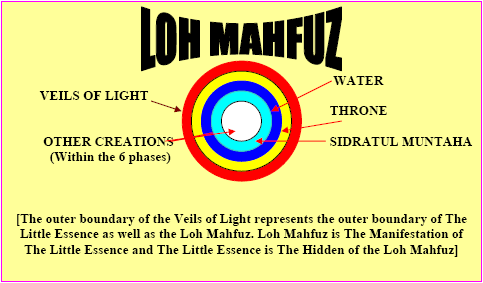 When all the creations within the Loh Mahfuz ended that is left behind is His Essence or His Face. He commanded to the effect:

To Allah we belong, and to Him is our return49

Everything (that exists) will perish except His own Face.50

All that is on earth will perish but will abide (forever) the Face of thy Lord, Full of Majesty, Bounty and Honour.51

Prophet Muhammad had said to the effect:

You are the Essence to which creations shall return.52

Many could not fathom what Allah meant when He commanded that when all creations including space and time are annihilated that remains is “His Face”. Hopefully, the diagrams below can enlighten them. “His Face” referred to by Allah is the face of The Essence at the outer boundary or the edge of The Little Essence (void of all creations). 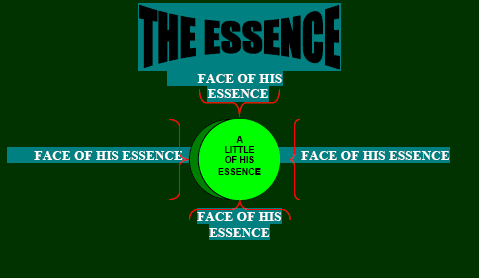 Prophet Muhammad (pbuh) had said that in the hereinafter we shall see Allah clearly as clear as we are seeing the full moon.53 Allah had also commanded in the Quran to the effect:

Some faces, that Day, will beam (in brightness and beauty). Looking towards their Lord. 54

O thou man! Verily thou art ever toiling on towards thy Lord – painfully toiling – but thou shalt meet Him56

Many cannot fathom the saying of the Holy Prophet (pbuh), hopefully the diagram can enlighten them. 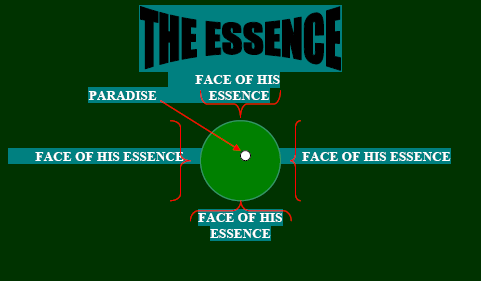 To show to His creations that His Divine Plan (Loh Mahfuz) is completed, perfect and all comprehensive, He caused our Prophet Muhammad (pbuh) to ascend and see the inhabitants of Paradise and Hell. Since the Armageddon has not happened, the Holy Prophet was seeing a phenomenal future event which is far beyond his time. The aforesaid inhabitants of Hell and Paradise as seen by him may not even been born at the time of the ascension.57